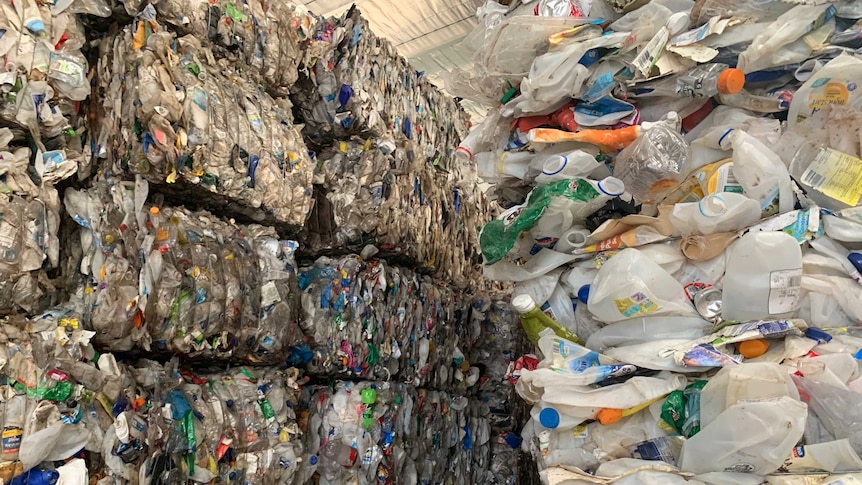 If Australians haven’t noticed the changes to how, when and where they recycle plastic, they will in the coming months.

Strict rules governing the export of plastics, amounting to a virtual ban, came into force on July 1 last year, and new conditions will be imposed on exported plastic from the start of the 2022-23 financial year.

Currently, plastic waste can only be exported if it is sorted into a single type of resin or polymer, or processed with other materials into processed manufactured fuel.

From July 1, 2022, only plastic waste that has been sorted into a single type of resin or polymer and further processed, for example into flakes or pellets, or processed together with other materials into processed manufactured fuel can be exported .

Waste management companies also need a license to export and the Department of the Environment has confirmed that 48 have been approved.

The regulations were designed to launch Australia’s National Plastics Recycling Infrastructure to ensure that 70% of plastic waste is recycled or composted by 2025.

The $1 billion RMF includes money from industry and state governments and will help with new technologies and infrastructure to enable hard-to-recycle plastics such as bread bags, take-out food containers and plastic packaging to be completely remanufactured in Australia.

The fund’s Remade in Australia campaign outlines how the material can be used.

National Waste and Recycling Industry Council CEO Rose Read said these and other initiatives have been underway for years and now signal significant changes for consumers.

Ms Read said more investment was still needed and singled out Queensland as a slow engine for reform.

She said Queensland only committed funds for the RMF late last year and had called for projects but had yet to officially back any.

With the state government still heavily subsidizing municipal waste to landfill in Queensland, Ms Read said significant changes had yet to be noticed in the state.

“The cost and disposal in landfills is rising and Queensland is behind other states,” she said.

“They’ve only had a landfill tax for a little while and the councils aren’t paying for landfill disposal. They’re going back, but they need to speed it up.”

Once the charges for the council increase, Ms Read said residents would face tougher rules about what they put in their bins.

“Australia will need to make significant changes to successfully meet our plastic recovery target [either recycled or composted] 70 percent [by 2025],” she says.

“Over the past three years, Australia has seen significant government and industry investment to improve our recycling infrastructure and technologies and increase Australia’s recycling capacity.

“The impact of these infrastructure investments has not yet translated into recovery rate statistics.

She said 14% of total packaging was still designed in such a way that it could not be recycled, reused or composted in the Australian recovery system.

Ms Read agreed and said that as government regulations began to put pressure on the market, Australia did not yet have sufficient facilities for all the plastic it needed to process.

She said building plants to process low-density polyethylene (LDPE) plastic – the plastic targeted via the government’s RMF – was “quite difficult”.

Ms Read also warned that although the federal government has consulted with businesses on issues surrounding plastic waste exports, the policy has many shortcomings.

“They cut all the cuts on this and it doesn’t add up,” she said.

“You finish [adding] all this extra cost to process it and then export it because you can’t process it here, but you can’t compete.

“Ideally you would like to export it raw but we cannot and overseas countries are able to sell their [high-density polytheylene] product at lower prices.”

However, a spokesperson for the Department of the Environment said companies have been aware of the changes since March 2020 and that “many companies will be well placed to meet the new requirements”.

“The July 1, 2021 ban on the export of mixed, often missorted and contaminated plastic waste is an important step for Australia in taking responsibility for our waste,” the spokesperson said.

Collecting soft plastics that previously ended up in landfill required a national approach and REDcycle was one of the first market players to place recycling bins in Melbourne shopping centers in 2011.

Now there are bins in more than 1,900 Coles and Woolworths stores across the country.

REDcycle collects 4 million pieces of flexible plastic per day and founder Liz Kasell said there has been a 200% increase in volume collected in the 2020-2021 fiscal year.

She said that while there was no way to determine how many Australians were engaged in the business, the amount of soft plastic recovered was “growing exponentially year on year”.

“It’s fair to assume that more and more Australian consumers are realizing that the soft plastic packaging they used to throw away can now be transformed into great new products,” Ms Kasell said.

“Plus, with more brands stepping up to ensure their packaging can indeed be REDcycled [over 200 and counting]even more Australians are being alerted that their favorite brands are supporting REDcycle and taking responsibility for the end of life of their packaging.”

REDcycle sends plastic to manufacturers to turn the material into items such as indoor and outdoor furniture, bollards, a PolyRok concrete alternative, signage, an asphalt additive for highway infrastructure known as of Tonerplas, as well as mini wheel stops and air conditioner mounting blocks.

Ms Kasell said ensuring consumers knew how ‘creating a robust market for products made from recycled materials’ contributed to a ‘true circular economy’ was key to the country’s shift to household recycling. succeed.

“Otherwise, ‘recycling’ – of all materials – is a linear pattern, not a circular one,” she said.

“The Remade in Australia campaign is a very important part of sharing that message.”