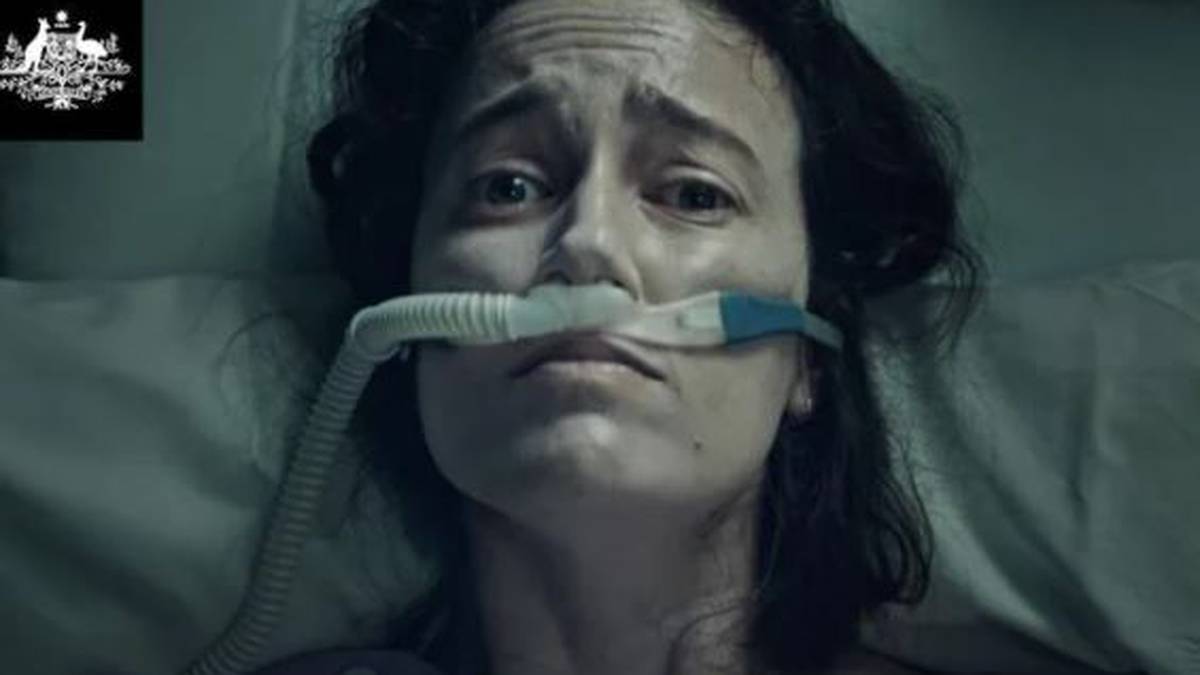 Coronavirus Covid 19: Outrage over graphic advertising from the Australian government

A confrontational announcement about the effects of Covid-19 airs in Sydney during the Delta strain outbreak. Video / Twitter

Australians have reacted with outrage to the release of a new advertisement warning of the dangers of Covid-19.

The government is set to release the shocking 30-second clip, which shows a terrified young woman struggling to breathe with a ventilator, on free television across the country starting Sunday night.

A glimpse of the ad immediately drew a reaction from the public, with many taking to social media to ask for it to be scrapped.

It comes as health experts call for tighter lockdown restrictions to prevent further spread of Covid-19 after NSW recorded 77 new cases on Sunday and one death.

UNSW adjunct professor and strategic health policy consultant Bill Bowtell took to Twitter to request that the ad be removed.

“This ad should be taken off the air immediately,” Bowtell tweeted.

“Today in Sydney, a young girl with Covid – about the same age as the actor in the commercial – is on a ventilator and fighting for her life.

“This callous ad can only distress his family and friends. It is ill-conceived in every way.”

Critical care specialist Tom Solano also criticized the dramatic vision, which shows pure fear in the young woman’s eyes as she stares at the camera without being able to breathe properly, as inaccurate.

“As an intensive care specialist, please know that we will never let you suffer like this on purpose. We will try to get more support before it gets so serious,” he said.

Others joined a chorus of outrage at the publicity, with some pointing to the irony of the scene, showing a young Australian in distress due to a virus she probably cannot yet be vaccinated against.

Completely offensive to run an ad like this while Australians in this age group are still waiting for their bloody vaccinations. https://t.co/4xF5hZAkqp

However, there are Australians who support the announcement, saying it is a good “wake-up call”.

Another wrote: “Graphic indeed, but people must be shaken off from vaccine hesitation!” “

This is exactly what the government hopes to achieve by releasing the announcement, with Australian Chief Medical Officer Professor Paul Kelly saying his aim is to shock us and get our attention.

“There will be a new Australian government ad tonight. It’s pretty graphic. We’re only doing this because of the situation in Sydney. And it will air in Sydney.”

As the outcry continued to grow on social media, a government spokesperson released a statement defending the announcement, stressing the need to increase the number of vaccinations in the community.

“The Delta variant is much more contagious and has a greater impact on younger cohorts than previous variants,” the spokesperson said.

The clip encourages NSW residents to book their immunizations, but also to stress the need to stay home and get tested.

“People who work in industries such as senior care and health care, and people with health problems, can all book to get vaccinated now, regardless of their age.

“Over 9 million doses have been administered in Australia, and anyone 18 years of age and over can speak to the GP for access to an AstraZeneca vaccine.”

The ad campaign is part of the government’s push to vaccinate the public, with this specific clip attempting to prove to the public how anyone can be affected by a particularly nasty case of the virus.