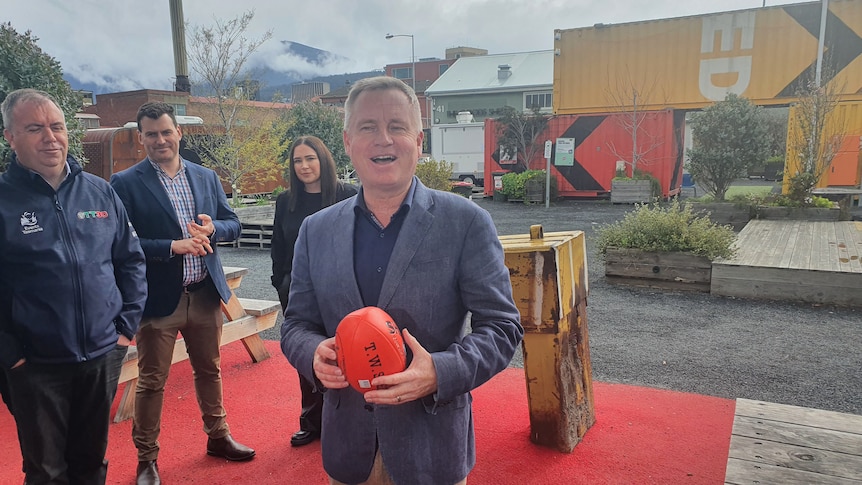 The Tasmanian government has said it will build a 23,000-seater stadium southeast of Hobart’s CBD on what is seen as the AFL’s preferred site – but only if club chairmen allow the state to have their own team.

The stadium proposal depends on the federal government paying half of its cost, estimated at $750 million, and on private investment.

Prime Minister Jeremy Rockliff has confirmed the stadium will be built on the nine-hectare Macquarie Point site, which had been earmarked for a mixed-use housing development, reconciliation park and Antarctic and science district, if Tasmania gets his AFL team license.

The decision comes less than 24 hours before Tasmania submits its official bid for an AFL squad on Monday.

Mr Rockliff said the Reconciliation Park and Science Quarter would still be built, but declined to clarify the housing estate’s future.

It is understood AFL CEO Gillon McLachlan and Managing Director of Property Development Matthew Chun were impressed with Macquarie Point during a site visit in June – a view reinforced after a second visit to Tasmania by Chun and AFL Chief Financial Officer Travis Auld in July.

But Mr Rockliff said his government would make its own decisions.

“We always said the AFL wouldn’t dictate anything to us when it came to our own stadium,” he said.

“We will make our own decisions.

“We believe in this project – the economic analysis indicates it will be a game-changer.”

He said the stadium and surrounding enclosure would “liven up southern Tasmania”.

“Today’s announcement aims to ensure that our preferred option for a new stadium, arts, culture and entertainment district is built right here at Macquarie Point,” he said.

“Surrounding this, of course, will come investment in tourism, hospitality, business, allied health – a huge opportunity for jobs and growth for all of Tasmania.”

The stadium “an insult” during the housing and health crises

Greens leader Cassy O’Connor described the move as “an insult” to Tasmanians at a time when thousands of people were homeless and the health system was in crisis.

“The news that they want to put a $750million stadium on this site is an insult to Tasmanians who can’t pay rent or live in a tent,” she said.

“It’s an insult to people who are languishing on the waiting list for elective surgery or who are worried that an ambulance will arrive on time when they need help.

“It’s pretty clear that what’s happened here is that the Prime Minister has allowed himself to be ensnared by the AFL.”

Ms O’Connor said housing should be the government’s priority.

“We have people who can’t afford to rent,” she said.

“We have people facing homelessness and evictions, and a government that promised to build all these homes, but the budget is never in the budget.”

“We are in the midst of a health, housing and cost of living crisis, and this government must do more to restore the basics for Tasmanians,” she said.

“Tasmanians deserve their own AFL team. What we don’t support is depending on building a stadium in the south.”

But Mr Rockliff said Tasmania ‘can’t say no to things every time’ and the state could build the stadium while spending money to improve the public health system.

“We are reducing our [elective surgery and outpatient] waiting lists,” he said.

“They are still too high, I have always said so, but we are investing more and more in health.

The subdivision in question

The decision overturns an earlier preference for nearby Regatta Point and calls into question the future of a long-planned residential development at Macquarie Point.

Plots of land for the mixed-use development “The Escarpment” have already been put on the market.

Mr Rockliff did not say whether residential development would continue, but said the government’s relationship with developer Milieu would continue.

“We work on all aspects of the design as it relates to Macquarie Point and work with all the developers,” he said.

“We have a positive working relationship with the developer, we will continue these discussions and we want to facilitate investments.”

Mr. Rockliff also did not respond directly when asked if Milieu should be compensated.