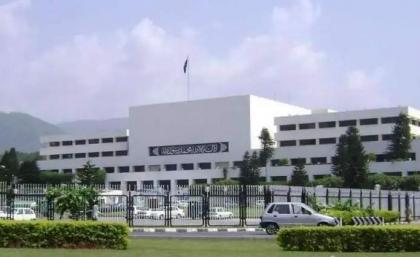 The Standing Senate Committee on Finance and Revenue opposed on Friday the new insertion of a section in the bill to impose a withholding tax on foreign payments by credit/debit or prepaid card.

ISLAMABAD, (UrduPoint/Pakistan Point News – June 17, 2022): The Senate Standing Committee on Finance and Revenue on Friday objected to the new insertion of a section in the bill to impose a withholding tax on payments abroad by credit/debit or prepaid card.

The Chairman of the Federal Board of Revenue (FBR), Asim Ahmed, informed the Committee that the advance tax was adjustable and was intended to encourage consumers to file their tax returns.

Chaired by Senator Saleem Mandviwala, the meeting discussed the ordinance article by article and approved several amendments, in addition to dissenting some of the amendments.

Discussing changes to penalties for failing to file tax returns, Senator Farooq H. Naik said there should be some relaxation for those who cannot file their returns for valid reasons.

Senator Zeeshan Khanzada, however, pointed out that relaxation could be misused and everyone would try to get the relief. The committee disagrees with the amendment. The Chairman of FBR informed the meeting that the government has added new sections to the Income Tax Ordinance to provide a penalty for non-compliance with the requirements of the Point of Sale (POS) system installed. by the FBR in the stores of the retailers.

He said retailers who could bribe or tamper with the system would be fined up to Rs 3 million and if even after paying a fine they continued with their corrupt practices, they would be prosecuted and could be imprisoned or detained. company could be sealed.

Senator Farooq Naik appreciated the governments decision to sanction, but disagreed with the idea of ​​prosecution, saying shutting down the business would be the most effective way to punish them.

Senator Anwar ul Haq Kakar, however, said tax evasion is a serious crime, so such tax evaders must be dealt with with iron fists.

The meeting was informed that the main source of verification of retailers’ activities at the point of sale was consumers who report to the FBR in case of false receipts through the price system.

The Committee also approved the proposal to levy a fixed tax of Rs 3,000 to Rs 10,000 on the electricity bills of small retailers.

Discussing the increase in the period of holding real estate to get exemption from withholding tax, FBR Chairman said the move will discourage dead investment in the country and investors will be encouraged to invest in progressive companies .

The committee approved the amendment on property tax. He also approved the omission of the section abolishing the collection of withholding tax from educational institutions.

The assembly also approved the proposal for an award system to promote tax culture. Farooq Naik ordered the FBR to publicize this program more so that as many consumers as possible can know about it.

The Committee also opposed the increase in withholding tax on capital gains from the sale of securities and recommended maintaining the old rate at 12.5% ​​in all areas.

The Minister of State for Finance, Ayesha Ghous Pasha, assured the Committee on occasion that the government would consider all recommendations made by the Committee.

The committee discussed adding new sections regarding penalties imposed on retailers and approved the addition of sections. The meeting was attended by Senator Zeeshan Khanzada, Senator Anwarul Haq Kakar and Senator Talha Mehmood.