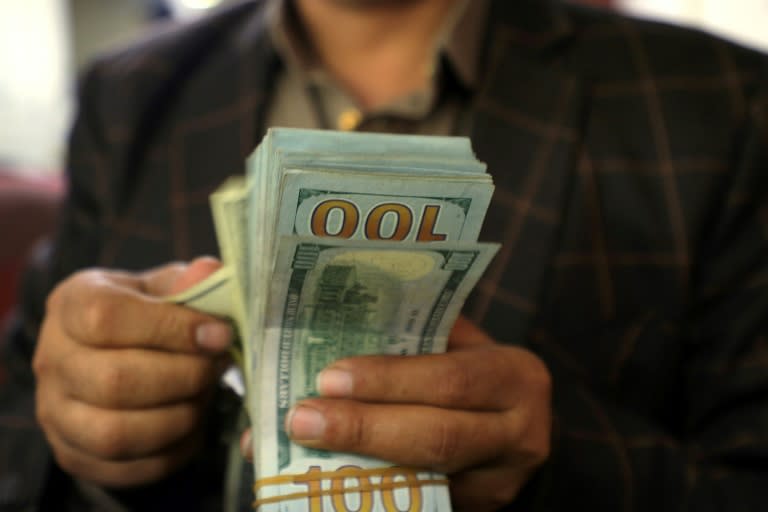 Along with a crushing seven-year military conflict, the Yemeni government and Houthi rebels are engaged in a battle on another front – a currency war that has opened a chasm in riyal values.

The government and Iran-backed Huthis used the same banknotes until the end of 2019, when rebels banned the printing of new banknotes in the government-run city of Aden due to concerns about inflation.

The resulting difference in money supply has since seen the value of the riyal drop to around 1,000 to the dollar in government areas, while the value in Houthi-controlled areas has remained relatively stable at 600.

Citizens and businesses in government and rebel-controlled areas have been left behind by the divergence, but especially those in the former, given soaring inflation there.

This internal exchange rate has also complicated trade and led to manipulation by profiteers, to the detriment of most in a country on the brink of famine.

“Right now, we have (…) an exchange rate of the same currency within the country,” said Amal Nasser, an economist at the Center for Strategic Studies in Sana’a. “It’s bizarre from an economic point of view.”

The conflict in Yemen has divided the country between the Houthi-controlled north and the south under the internationally recognized government that transferred the central bank to Aden after insurgents seized Sana’a in 2014.

The war has pushed the nation, long the poorest in the Arabian Peninsula, to the brink of famine and economic collapse, with most schools, factories, hospitals and businesses destroyed or closed.

As the riyal has fallen to new lows in recent weeks in government areas, the central bank pledged to withdraw the string of banknotes that had accumulated in its territory after the Huthi ban in late 2019 .

Aden’s central bank was caught off guard as it expected the new banknotes to eventually spread evenly across the two zones, but the concentration of supply in the government zone fueled inflation there and spurred the divergence in exchange rates.

The government introduced a stock of what it claims to be old banknotes this month, drawing anger from rebels who accused it of minting “counterfeit” new currency.

Rebel authorities have also banned their use and provided civilians with guides to identify so-called “fakes” – which experts said would be difficult for an average citizen to do.

“Obviously, this new injection of money will negatively affect the economy, increase inflation and affect the purchasing power of citizens,” Alaa al-Haj, a resident of Aden, told AFP.

Yemenis were already battling the skyrocketing cost of living in a country where more than 80% of the population depends on international aid.

– The Huthis allege a ruse –

The Houthis have accused Goznak, a Russian state-owned company, of colluding with the central bank of Aden to print “large amounts of counterfeit money” this year – “in particular 1,000 riyal notes” to pass the new tickets as old.

Central bank adviser Wahid al-Fawdai said the banknotes recently released by the government had been in central bank reserves for several years.

Goznak and the central bank made no comment when contacted by AFP.

Social media and newspapers are replete with stories of profiteers exploiting the unstable economic situation.

Some people have used the rate spreads as a cash-out opportunity, including using the newly issued “old” notes in Aden to redeem those printed after 2017 at a discount of around 20%.

Experts interviewed by AFP believe that the new “old” banknotes are more likely to infiltrate largely undetected in Houthi areas because they are difficult to distinguish from old banknotes.

Ultimately, this should help the central bank close the exchange rate gap between the two zones, they said.

the truth about taxes, property and how to get a tax-free pension

How would additional billions of IRS funding affect taxpayers, audits?